You have no items in your shopping cart...

This is reflected in the finish of all materials, from the wood used for the stocks to the beautiful black finish on all metal parts. Of course, it's not just the finish that makes a Weihrauch air rifle shoot well. The accuracy of manufactured parts is also extremely important. For example, most parts of Weihrauch air rifles are made on the most modern CNC machines with which extremely high tolerances can be achieved.

You notice that Weihrauch air rifles have very little splay and slack and are therefore a bit more accurate.

An important part of any air rifle is the trigger system. Weihrauch has therefore put a lot of effort into developing a trigger system that can be adjusted in different ways. 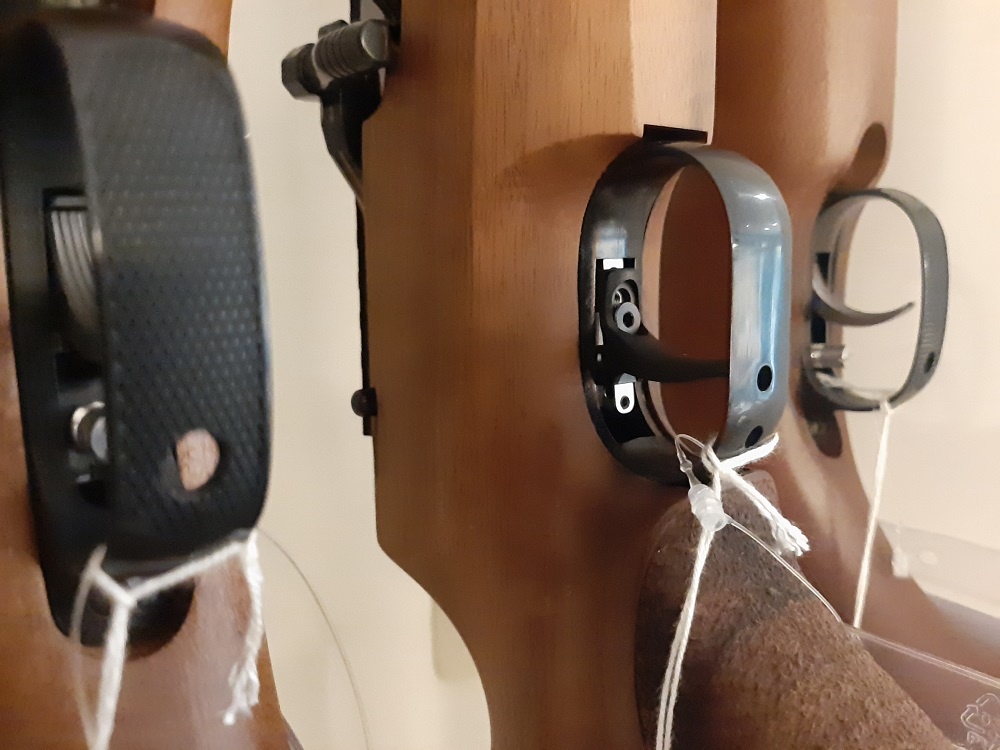 This trigger can be set in 3 ways, namely the first trigger path (first stage) , the joint 1st and 2nd trigger path pressure (seccond stage) and trigger resistance (creep). All PCP air rifles are also equipped with adjustable trigger systems of very high quality, which you can expect from Weihrauch.

Weihrauch has a number of different models of break barrel rifles in its range that have been sold for years and are still immensely popular. The big difference between these air rifles is mainly reflected in the weight, power and length of the rifle.

The Weihrauch HW35 is one of the most popular and sold models of Weihrauch, this air rifle is a real all-round rifle that can be used for most applications. For the younger shooter there is the Weihrauch HW30, this rifle is a bit lighter and therefore suitable for every shooter, including the junior shooters among us.

If you are looking for a powerful Weihrauch break barrel, then the HW80 is a good choice, this air rifle has a power of no less than 23 Joules and is the most powerful among the break barrels with a spring. Only the Weihrauch HW90 with the Theoben system is even more powerful. The HW90 has no spring but is equipped with an airtight reservoir with which you can fill the air pressure to no less than 26 bar with a pump at the rear of the rifle, the higher the pressure the more powerful the rifle shoots.

Weihrauch has 3 models of underlever air rifles, the HW57 is the most affordable model and is equipped with a magazine that automatically slides up when the rifle is cocked. The rifle weighs only 2.5Kg, making it the lightest among Weihrauch's underlevers and therefore suitable for young and old.

The HW77 and the HW97 from Weihrauch are very similar, the power of these rifles is almost the same and the loading mechanism is also almost the same. These rifles are both extremely accurate, the major differences between the Wehrauch HW77 and HW97 are mainly reflected in the sights. The HW97 has no sights installed and must always be equipped with a rifle scope, a silencer or moderator can also be screwed onto the HW97 that then forms one whole with the rifle. HW77 does have sights in the form of metall open sights where the rear sight is very finely adjustable. A silencer or moderator can also be mounted on the HW77, this is then not screwed but is slid over the front sight base and secured with 4 screws.

Weihrauch makes various PCP air rifles The HW100 and HW110 are immensely popular among shooters all over the world. Weihrauch also provides a PCP air pistol the HW44.

The differences between the HW100 and HW110 are that the HW100 has a 14 rounds magazine and that the system consists of 2 metal parts. The pressure cylinder is also easy to remove with the HW100. The loading mechanism is also made entirely of steel.

The HW110 has a superstructure with a picatinny rail that consists entirely of a high-quality polymer, also a part of the loading lever is made of polymer, weihrauch did not do this to save money, but mainly to reduce the weight and improve the weapon to be more compact.

Weihrauch can supply parts for all air rifle models that they now have in their range, even for models that are 40 years old. We can maintain and repair all models in our workshop. We usually have most parts in stock, whether you are looking for a barrelring, spring or piston, we usually have it, so that your air rifle can be repaired quickly and professionally.